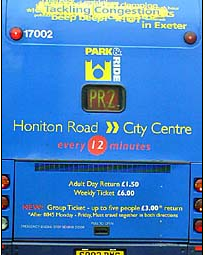 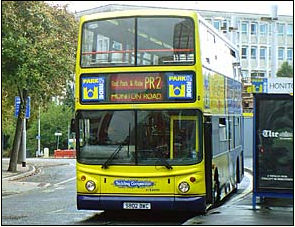 The Park and Ride are the best bus services in Exeter. They are frequent, take direct routes and cheaper than the ordinary bus services. Thre are four Park and Ride services and they are designed to reduce traffic congestion by allowing visitors to park their cars at the outskirts of Exeter and take a bus into the city centre.

The PR2 service operates between Exeter business park, Honiton (just off the M5 junction 29) and Exeter city centre, Paris street. Buses run every 12 minutes and the adult day return fare is £1.50&nbsp.; The journey time is about 18 minutes. Buses stop running after about 18:30 in the evening.

The PR3 service operates between the Royal Devon and Exeter hospital and Digby & Sowton train station (near junction 30 of the M5). Buses run every 15 minutes and the adult day return fare is 85 pence. The journey time is about 20 minutes. Buses only run until about 18:30 in the evening.

The PR4 service operates between Sowton industrial estate (near junction 30 of the M5 and Digby & Sowton train station) and Exeter city centre, Paris street. Buses run every 12 minutes and the adult day return fare is £1.50&nbsp.; The journey time is about 16 minutes. The last bus is in the evening at about 18:15.

The PR5 service operates between Matford park and Exeter city centre, South street. Buses run every 10 minutes and the adult day return fare is £1.50&nbsp.; The journey time is about 15 minutes. The last bus is at about 18:30.

In general, local train services are faster and more comfortable than local buses.

The are six local train stations in Exeter. Four of these stations are on the Avocet line which connects Exeter with Exmouth: St James Park, Polsloe Bridge, Digby & Sowton and Topsham. Trains run every 30 minutes and the journey time is less than 10 minutes. An adult day return costs about 2 pounds.

In my opinion, Exeter’s local bus services are just not very good. Buses run infrequently, take meandering routes, are uncomfortable and poor value for money. Many services only run once every hour, the buses seem to go around in circles so that even a journey of just 3 km (2 miles) can take an hour. Most of the buses are quite small and have very little leg room although during peak times the buses are so full that you are unlikely to get a seat.