Most services to Exeter International airport are operated by the low-fares airline Flybe. Flybe is the largest independent regional airline in Europe and has it’s main base at Exeter. Flybe began operation in 1979 as Jersey European airways, in 2000 it rebranded as British European airways and in 2002 it repositioned itself as a low-fare airline and shortened it’s name. Today Flybe operates on nearly a hundred routes to the United Kingdom, France, Spain, Germany, Ireland, Switzerland, Austria, Netherlands and Portugal. 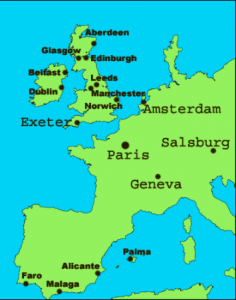 Within England, Flybe flies from Exeter to Leeds, Newcastle, Nottingham, Manchester and Norwich. From Exeter, Flybe flies to the Scottish cities of Aberdeen, Edinburgh and Glasgow.

Flybe also flies to Gurnsey and Jersey on the Channel islands. To Ireland, Flybe flies to Dublin and Belfast. Flybe flies to major continental European cities such as Paris, Amsterdam, Geneva and Salsburg. Other popular flights are to Alicante, Malaga and Palma in Spain and Faro in Portugal.