Devon, a county located in the southwest of England

Devon is a county located in the southwest of England. Devon is characterised by it’s mild climate, popular beach resorts such as the English Riviera and beautiful countryside such as Exmoor and Dartmoor national parks.

The Romans called Exeter “Isca Dumnoniorum” meaning the Riverside Settlement of the Dumnonii. In the ancient Celtic language Isca means river or water. The Dumnonii (meaning valley dwellers) is the name of the Celtic tribe that inhabited the South West of England. The modern city name Exeter is derived from the word Isca and the county name, Devon, is derived from Dumnonii. 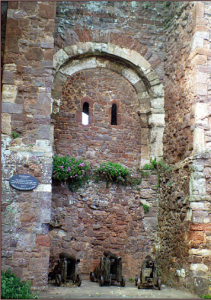 The Jurassic coast of east Devon and Dorset is listed as a UNESCO world heritage site because of the unique geology and landscape. Many dinosaur and ammonite fossils have been found on this coast. The Jurassic coast is also highly regarded for its unspoiled nature and the outstanding beauty of the many coves and beaches.

Exmoor national park is located in north Devon and Somerset and was created in 1954 to enhance and conserve the wildlife and heritage of an area of outstanding natural beauty. Exmoor contains ancient forests, heather clad moors, a dramatic coastline and picturesque villages. Large herds of red deer and the rare Exmoor pony roam the national park.

Dartmoor national park is located entirely within Devon and was created in 1951. Dartmoor is an area of moorland with forested valleys and wind swept granite hilltops known as tors. During the Neolithic and Bronze age the climate of Dartmoor was much warmer than it is today and a large population of people lived on Dartmoor. Remains of prehistoric human settlements are found all over Dartmoor. Dartmoor is very popular with hill walkers and some routes become very busy during the summer.

Exeter is a small city with a population of over 100,000 people although nearly a half million people live within a 45 minute catchment area. 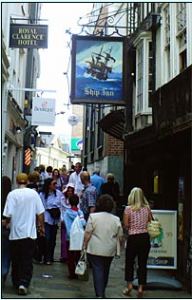 The Elizabethan adventurers and sea captains Sir Walter Raleigh and Sir Francis Drake were both born in Devon.

Drake is said to have exclaimed “Next to my own ship I do most love that old Ship in Exon, a tavern in Fish Street, as the people call it, or as the clergy will have it, St. Martin’s Lane”.

Both Raleigh and Drake are reputed to have used, as a meeting place, the nearby Mol’s coffee house run by an Italian man. In Elizabethan times, coffee drinking had just been introduced into England. Today the timber framed building is used as a shop selling maps and stationery, called Eland.

Exeter is an area where people enjoy a high quality of life and it has become a popular choice for business relocation. One such example is the relocation to Exeter of the national weather forecasting service, the Met Office. The Met Office is now, one of the largest employers in Exeter. Exeter and Devon are also becoming well know for the quality and freshness of locally produced food. During 2006, local chef Michael Caines received an MBE from the Queen for services to the hospitality industry.

The recorded history of Exeter begins around AD50 with the arrival of the Roman army during their conquest of southwest England. At the lowest crossing point of the river Exe, defended on two sides by steep valleys, the Romans built a fortress as the winter headquarters of the second Augustan legion. The original site of the Roman fortress is now part of Exeter city centre.

The architecture of Exeter shows evidence of every major period of English History. Exeter boasts an impressive 1,600 listed buildings and the historic core is designated an area of archaeological importance, one of only five such areas in England and Wales. 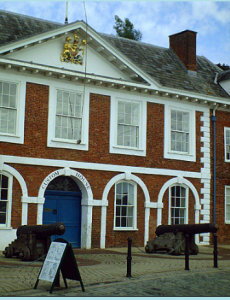 The Exeter custom House, on the Quay, is a reminder of the importance of international maritime trade in Exeters history. The custom house was constructed in 1681 and was used by Customs and Excise until 1989. It is the oldest surviving purpose-built custom house in Britain.